A schematic of the beads mill is shown in Fig. 1. The apparatus consists of 0.2 L vessel, a pump for supplying the nanoparticle slurry, and a mixer tank. Slurry is pumped into the vessel of the beads mill, which contains the beads and centrifugation rotor. The lower portion (dispersing section) of the vessel is used to agitate the beads and break nanoparticle agglomerates, while the upper region (centrifugation section) is used for bead separation from the slurry. The vessel is enclosed in a cooling jacket to prevent temperature increases in the system, and is completely sealed from the outside environment.
The dispersion process in the beads mill is described as follows: The raw material slurry containing agglomerated particles is pumped into the dispersing section of the vessel at a mass flowrate of 10 kg/h, where it interacts with the violently agitated beads. Gradually, the slurry reaches the upper part of the dispersing region, where it is separated from the beads by centrifugal force. The beads remain inside the mill, while the nanoparticle slurry is pumped out of the vessel. The product particles are collected in the mixing tank and the dispersing process is repeated.
For all experiments, the peripheral speed of the rotor in the centrifugation section was fixed at 10 m/s. ZrO2(zirconia) beads (Nikkato Corp., Osaka, Japan) with sizes of 15, 30, 50, and 100 μm were used. The zirconia beads occupied 65% of the vessel volume. The slurry was composed of aqueous TiO2 (titania) nanoparticles (MT100AQ, nominal primary particle size of 15 nm, produced by Tayca Co., Ltd., Japan) where titania made up 10% of the slurry mass. Initially, the mean particle size of the agglomerated particles was 246 nm as measured by dynamic light scattering (DLS, Microtrack UPA150, Nikkiso Corp). 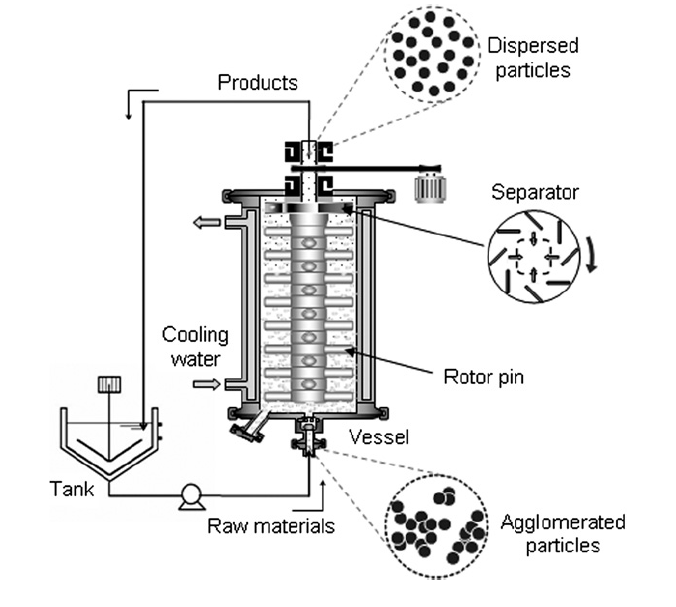 The number concentration, dispersing power and impulsive power of all tested beads is shown in Table 1. Larger beads have greater dispersing power and impulsive power per bead, but lower number concentrations in the beads mill. The X0.9 and X0.5 values of the cumulative titania size distributions as a function of specific power are shown in Fig. 5. For 15 μm beads, the minimum X0.5 was reached at a specific power two times lower than specific power required to reach the minimum with 30 μm beads, indicating the smaller beads can perform the same work as larger beads with a lower energy input. Similar results have been observed by Kwade [14] for a stirred ball mill. 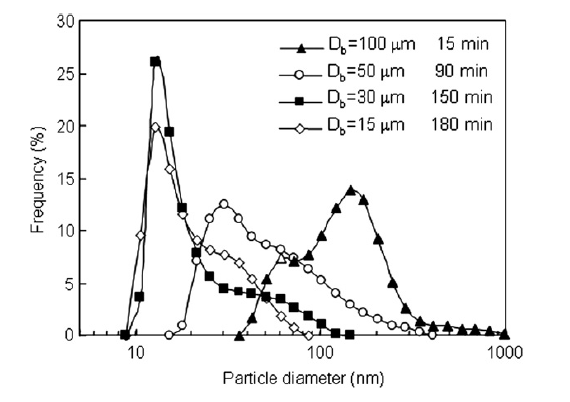 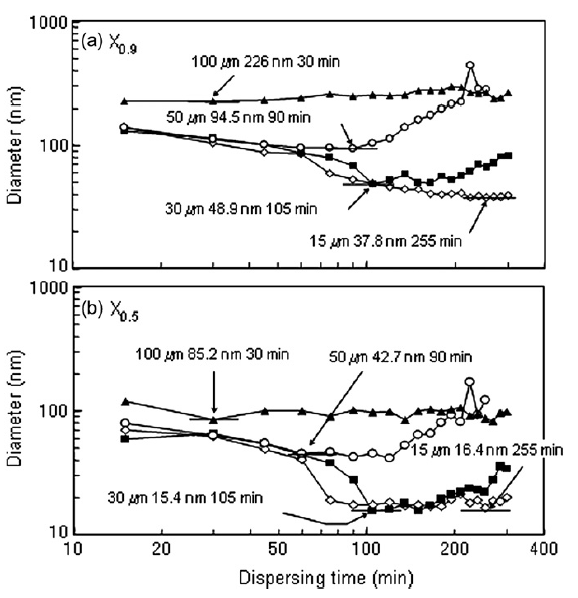 Fig.4 X0.5 and X0.9 for nanoparticle size distributions as function of dispersing time. 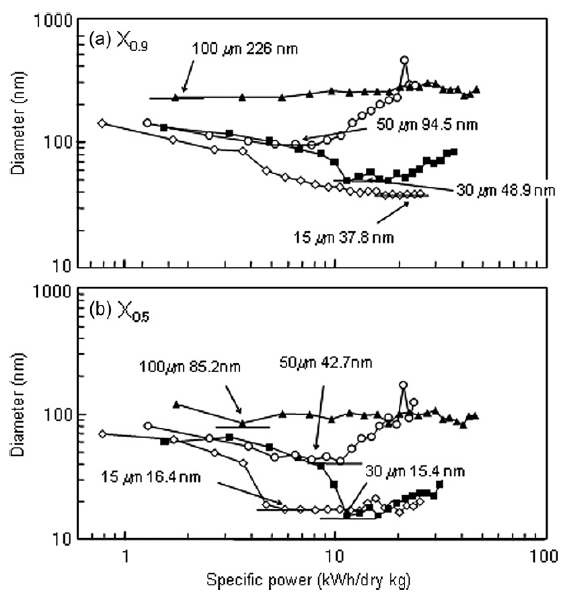 Fig.5 X0.5 and X0.9 for nanoparticle size distributions as function of specific power.

Fig. 6 shows the XRD patterns of the titania nanoparticles for all tested bead sizes. In general, the larger beads had a greater effect on the crystallinity of the nanoparticles. Fig. 7 shows the half width value of the major peak in the XRD pattern as a function of specific power. The half width increased slightly with increasing specific power for all beads, and greater increases occurred for larger sized beads. Smaller beads, therefore, had less effect on particle crystallinity than larger beads, because collisions between nanoparticles and smaller beads have less impact energy.
Fig. 8 shows the TEM images of nanoparticles before beads milling and after a dispersing time of 300 min. Prior to milling, agglomerated titania nanoparticles with dimensions from 200 to 300 nm were observable, and primary titania particles were rod-shaped. After dispersion with 15 and 30 μm beads, unagglomerated primary particles were visible with their rod-shaped morphology conserved. 50 and 100 μm beads had little effect on the size of the nanoparticle agglomerates. Furthermore, the primary particles appeared to have undergone a morphology change from rod-shaped to more spherical when 100 μm beads were used. This agrees well with the XRD patterns and shows that larger beads were not only incapable of breaking up nanoparticle agglomerates, but also nanoparticle structure and morphology was altered during milling with larger beads.
The measured UV–vis spectra of the titania particles in suspension at the time of minimum particle size distribution for each bead size is shown in Fig. 9. UV–vis Spectra agreed well with measured size distributions, i.e. smaller beads were able to fully disperse nanoparticles and therefore greater light transmittance through the nanoparticle suspension was possible when smaller beads were used. 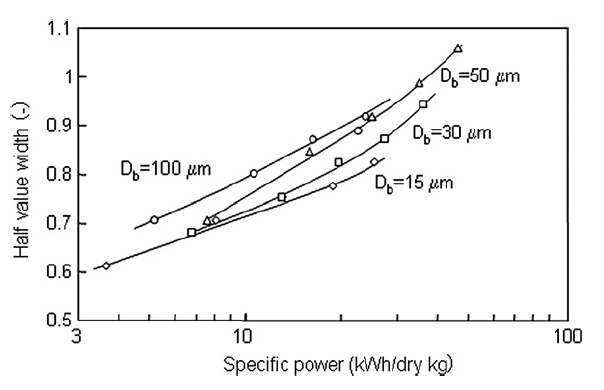 Fig.7 XRD pattern half widths as a function of specific power. 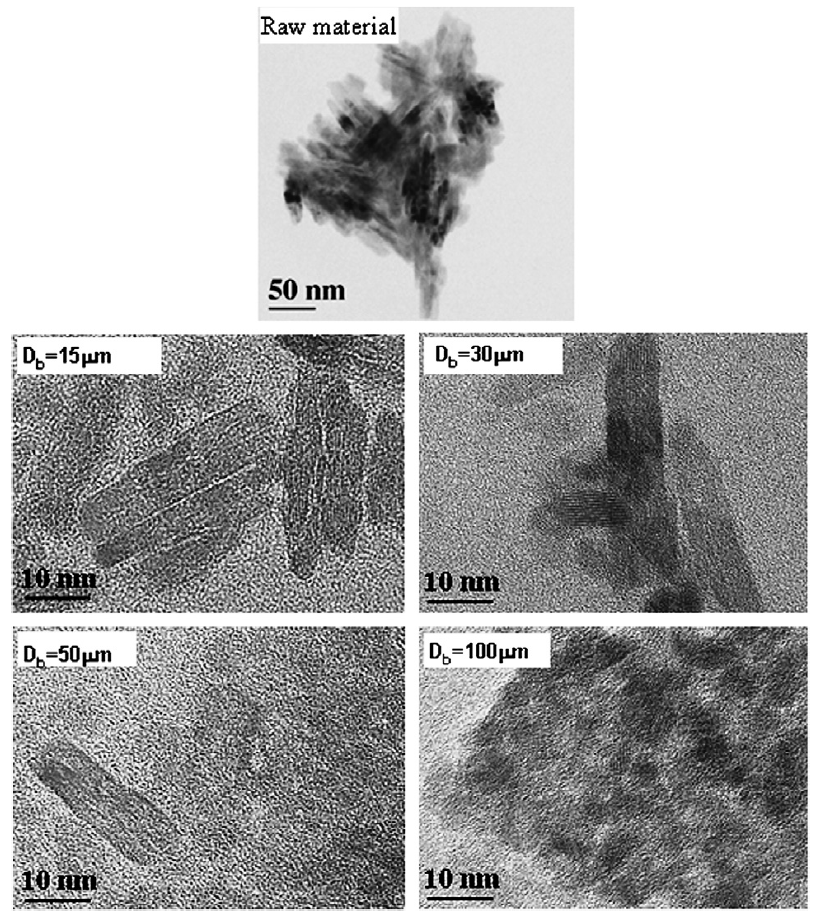 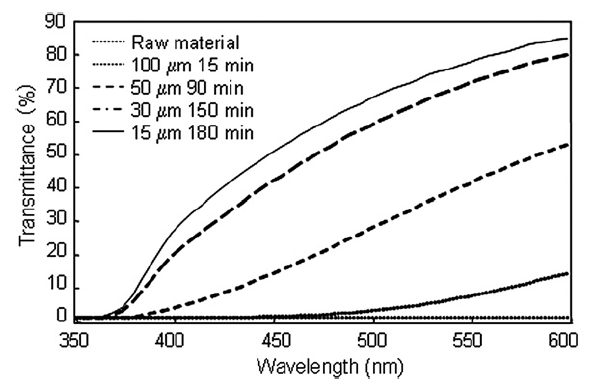 Beads milling with centrifugation in a newly developed beads mill allowed for the use of beads as small as 15 μm in diameter. The smaller beads were capable of dispersing nanoparticles with primary particle sizes of 15 nm that were originally highly agglomerated. No additional chemical treatments or surface modifications were necessary to create a stable nanoparticle dispersion. In addition to being able to create stable dispersions, smaller beads require less specific power to fully disperse nanoparticles. The lower impact energy of smaller beads during bead–nanoparticle collisions minimized the effect that the milling process had on nanoparticle morphology and crystallinity. Furthermore, smaller beads were less likely to break and contaminate the nanoparticle slurry during the milling process. With the importance of nanoparticles in almost all scientific disciplines and industries, this type of beads mill, which is capable of dispersing nanoparticles without chemical treatment, will have many applications.