In recent years, nanomaterials have been applied to the advanced materials and chemical industries. Some portions of them are processed by bead mills that utilize microbeads finer than 100 micrometers. The microbead mills have contributed to improvements in qualities and performances of industrial products using nanomaterials, such as the resolution of liquid crystal displays, micronized electric parts of mobile phones, and the transparency of sunscreen. Lately finer nanoparticles have been required for further improvements in qualities of the nanomaterials. It has been, however, increasingly difficult to disperse nanoparticles finer than 100 nanometers without significant crystal damages, since the finer they are, the more fragile they are. The nanoparticles are easily damaged by the impacts of microbeads even they are finer than 100 micrometers. Note that the crystal damages of the nanoparticles result in re-agglomeration, loss of crystal soundness, and gelling of slurry. Required for the modern nanomaterial processing were, therefore, new bead mill technologies that materialized dispersion of nanoparticles with minimized crystal damages by controlling the impact of beads, and also with homogeneous agitation.

Since microbeads finer than 100 micrometers are used for dispersing nanoparticles, a bead mill equipped with a centrifugal bead separator is applied to processing using the microbeads. It is because choking of the slurry does not occur in the bead separator, but on the contrary, it occurs in other types of bead separators.

Thus, new technologies are required for dispersing such fine and fragile nanomaterials without significant crystal damages. To respond this need, Hiroshima Metal & Machinery developed a new microbead mill equipped with a dual-axial driving mechanism for dispersing nanoparticles with low crystal damages (Dual Apex Mill (DAM)). The agitator and the bead separator are driven independently by two axes. The mechanism allows low speed agitation and highspeed rotation of bead separation at the same time. This model has been applied to many advanced fields of slurry treatment for dispersing nanoparticles, such as processing barium titanate for ceramic capacitors, pigment slurry, etc.

In addition, most lately requirements of dispersion of nanoparticles with low crystal damage have been more intense for producing state-of-art nanoproducts. Thus, Hiroshima Metal & Machinery recently developed the newest and most advanced model, Ultra Apex Mill Advance (ADV), that is specialized in dispersion of nanoparticles with ultimately low crystal damages. This model also provides a uniform particle size distribution.

The ADV employs a multifunctional rotor that has functions of an agitator and a bead separator in a single structure. The rotor is featured as large rotor diameter producing low centrifugal force to reduce the impact, low height for uniform slurry flow, and good capability of bead separation corresponding to low centrifugal force. It is applicable to advanced nanomaterials, such as 100 nanometer class barium titanate and nano metal-complex pigments. 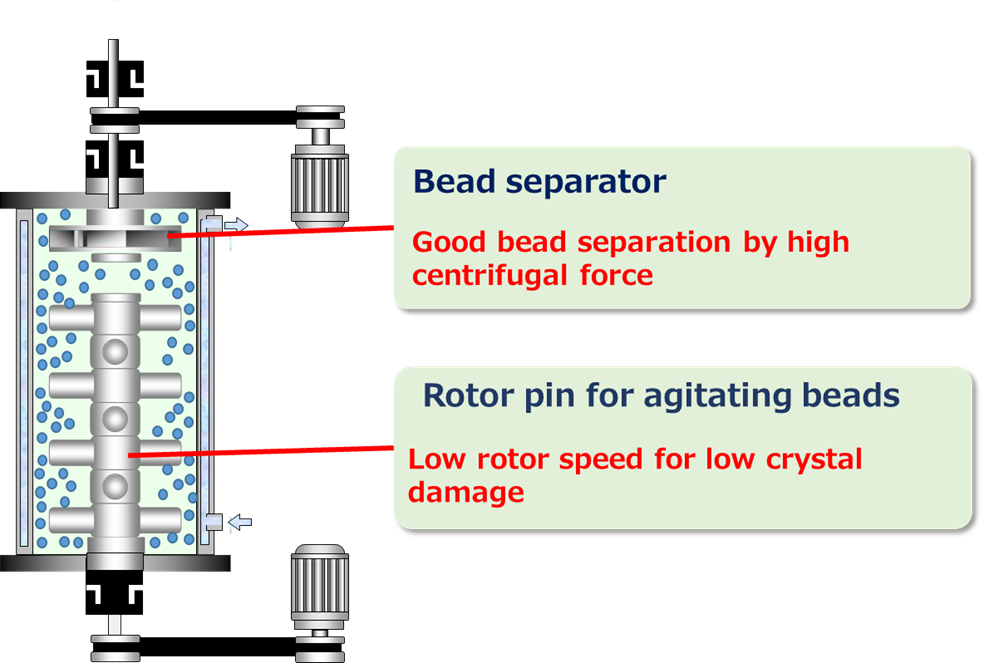 For dispersion of nanoparticles with low crystal damages, it is necessary to use microbeads as fine as 50 micrometers, and to agitate the slurry-bead mixture moderately. Therefore, the microbead mill should have both good capability of microbead separation and moderate agitation at the same time. Slow rotation of the agitator results in moderate agitation in the conventional microbead mills, however it results in decrease in the centrifugal force for bead separation. It is because the agitator and the bead separator are fix to a single driving shaft. Therefore, the microbeads easily leak from the mill.

The DAM solves this problem by adopting a dual-axial driving mechanism revolving the agitator and the bead separator by two shafts. In the conventional bead mills equipped with centrifugal bead separator, the rotor speed is limited above 6m/s, since slow rotation results in bead leakage. Contrarily, the lowest rotor speed of the DAM is 2m/s. It is because even the agitating rotor revolves at low speed, the separator does at high speed. The low speed rotation of the agitating rotor enables the DAM to reduce the crystal damages caused by strong bead impacts. The DAM has been employed by a number of customers who process nanomaterials avoiding crystal damages, such as barium titanate for the ceramic capacitors and metal-complex pigments for the liquid crystals. 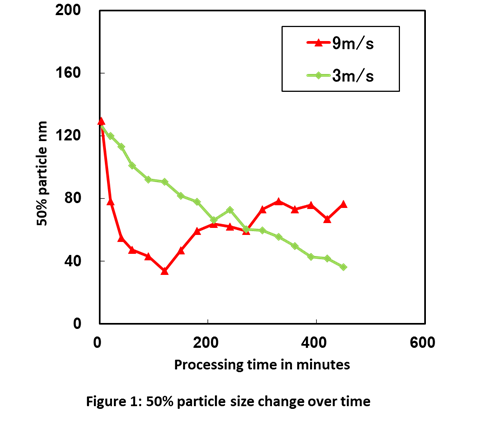 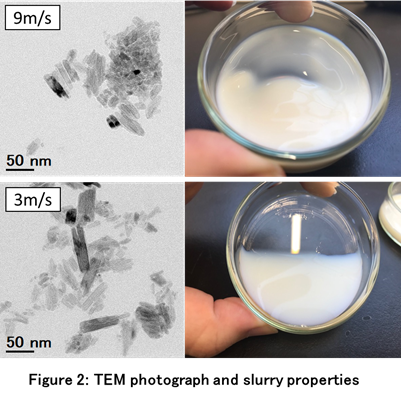 Features
Ultra Apex Mill Advance (ADV) is a bead mill that is optimized for “nanoparticle dispersion with ultimately low crystal damages.”. The ADV employs a state-of-art multifunctional rotor that enables nanoparticle dispersion with the lowest crystal damages in the HM&M’s lineup. The mill has a wide and low height agitation/bead separation rotor, which provides low centrifugal force for moderate agitation in the mill. The rotor has a capability of bead separation good enough for microbeads even under condition of the low centrifugal force.

The rotor has 4 features that make the mill different from others.
Feature 1 Multifunctional rotor; the rotor is basically a bead separator and is redesigned to have an agitational function that provides a uniform rotational flow.
Feature 2 Large diameter; the rotor that is large in diameter provides low centrifugal force to reduce the impact of beads.
Feature 3 Low height; small H/D (Height/ Diameter) prevents short pass of slurry and gives a uniform slurry flow in the mill.
Feature 4 High bead separating capacity; despite the centrifugal force is low, microbeads as fine as 30 micrometers are separated satisfactorily owing to the newly designed rotor with a good capability of bead separation.

As described above, since low impact force is given in the ADV even at a high rotor speed, the ADV provides a high frequency of contacts between beads and nanoparticles and low impact force to minimize the crystal damages of nanoparticles at the same time. Uniform distribution of agitational energy in the mill is also required for the microbead mills for dispersing fragile nanoparticles, as locally high impact force should also be avoided to minimize the crystal damages. Low height and straight agitating blades of the ADV’s rotor provide uniform agitational energy in the mill, so that low impact energy is given both entirely and locally. In addition, the low height rotor prevents short pass of the slurry making better uniformity of the slurry.
The ADV provides proper dispersing conditions to keep the sound crystals of barium titanate finer than 100 nanometers for the upcoming advanced ceramic capacitors, to maintain the particle shapes of nanometals for secondary battery’s electrodes, and to give a sharp size distribution of pigments for the highly transparent ink-jet inks.

It is considered that the debris generated from the nanoparticles were a lot in the UAM and they adhered to the primary particles, resulting in stagnation of decrease in the mean diameter despite the primary crystals went finer. On the other hand, the stagnation was much lower in the ADV. The crystal damages on nanoparticles were lower and the condition of dispersion was better in the ADV. 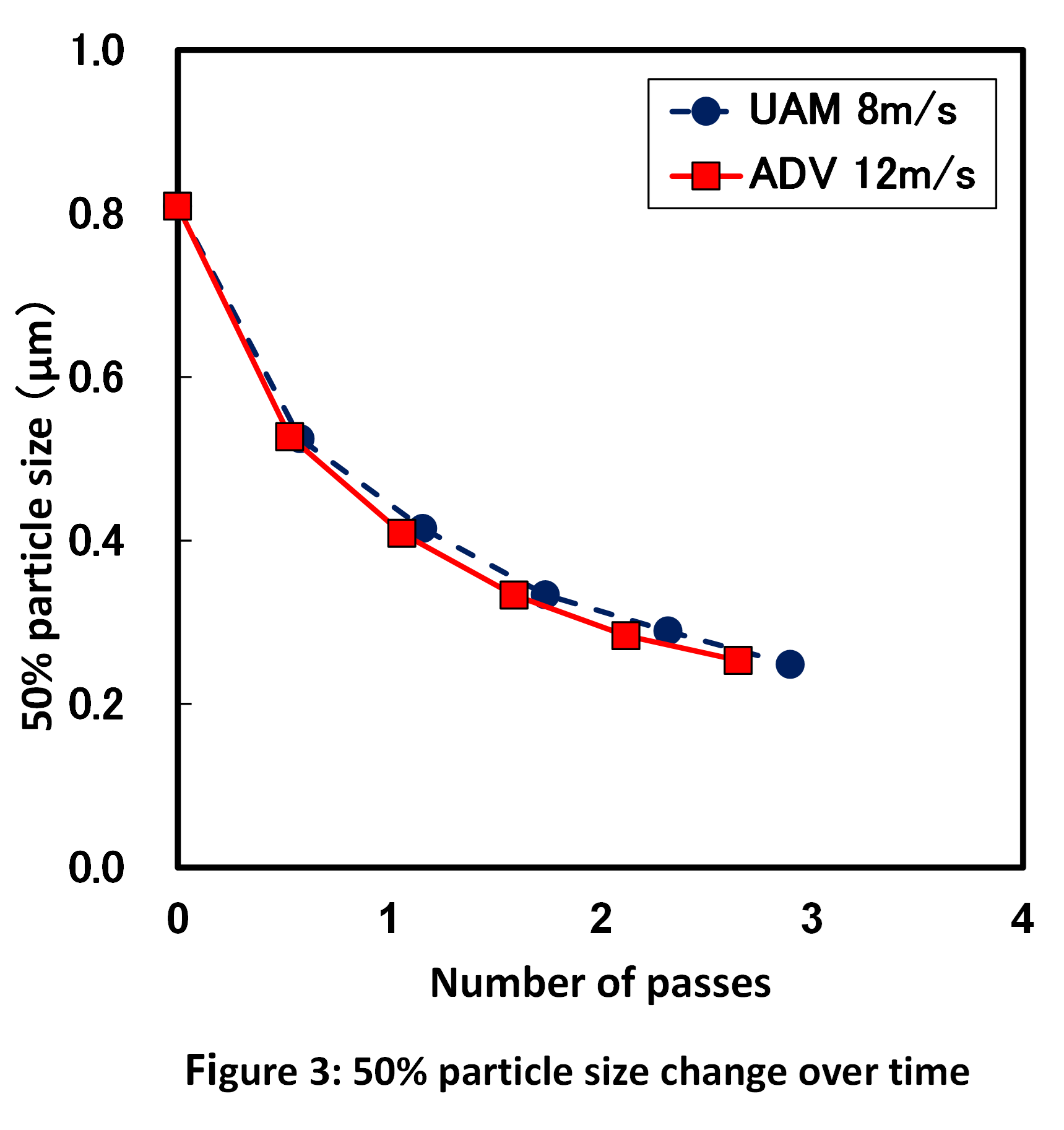 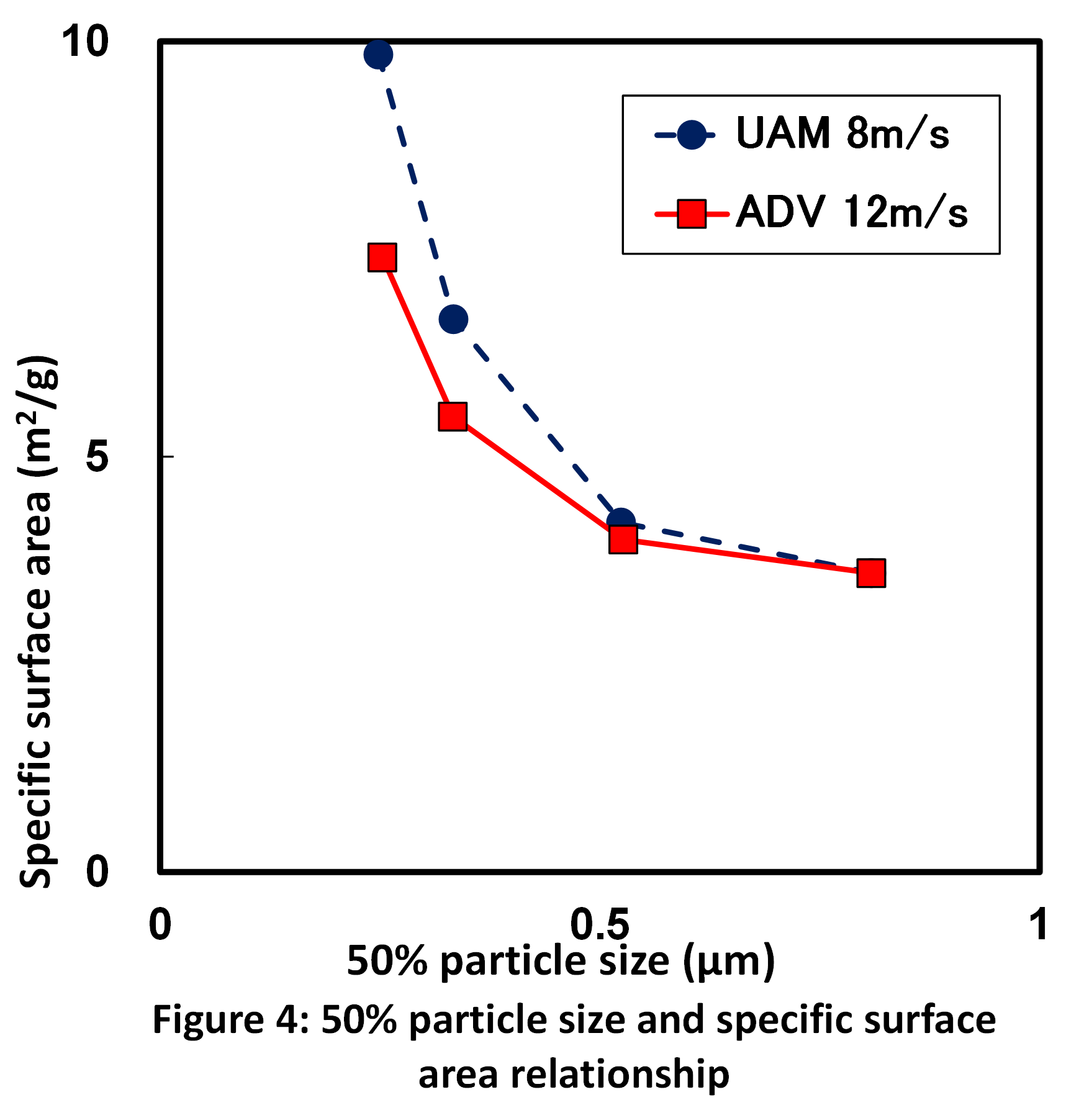 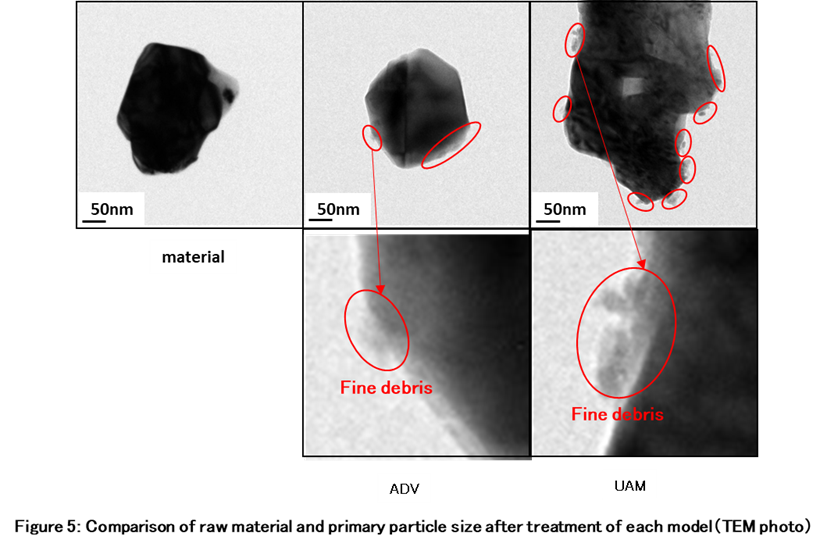