A newly developed beads mill was used to create well-dispersed suspensions of TiO2 (titania) nanoparticles in methyl methacrylate (MMA) and TiO2-PMMA nanocomposites were synthesized by subsequent polymerization of the TiO2-MMA suspension. Beads milling successfully broke up titania nanoparticle agglomerates with the addition of the coupling agent (3-acryloxypropyl) trimethoxysilane (APTMOS) to the titania-MMA suspension. Agglomerated particles were broken up into primary particles as small as 10 nm in suspensions with nanoparticle mass fractions as high as 0.05. Well-dispersed suspensions of titania nanoparticles had reduced UV transmission but visible light transmittance similar to pure MMA. TEM images showed that the milled nanoparticles remained well dispersed in titania-PMMA nanocomposites, and the addition of titania nanoparticles to PMMA increased the PMMA thermal stability. Spin-coated titania-PMMA films had higher refractive indices than pure PMMA films, with film of higher titania weight percent having higher refractive indices. 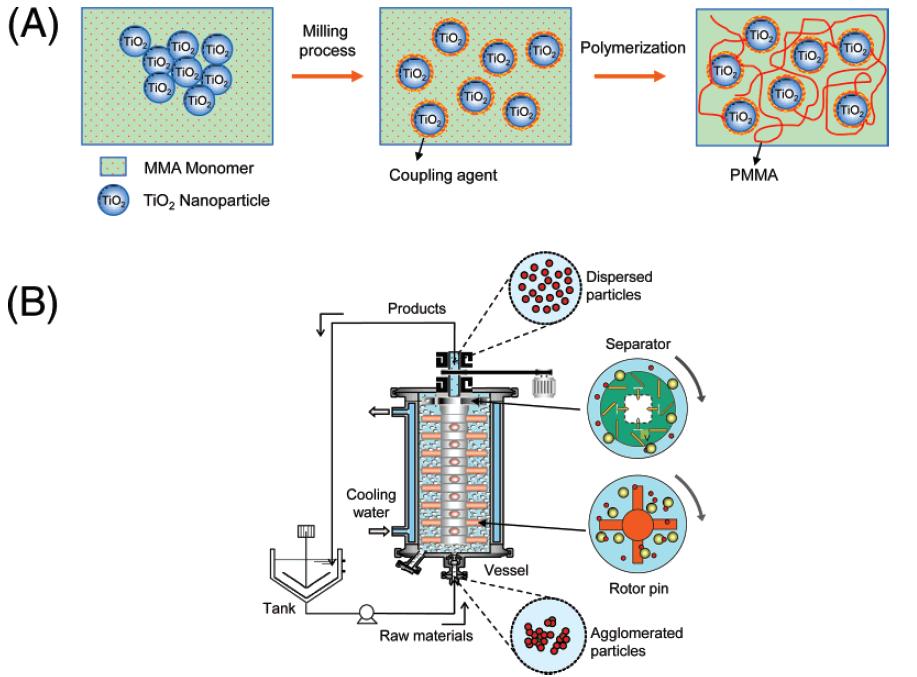 Figure.1 (a) Representation of the milling-polymerization process. (b) Schematic of the beads mill system with centrifugal bead separation.

Materials. Two types of commercially produced titania nanoparticles, surface unmodified particles with a nominal primary particle size of 15 nm (MT150A, rutile phase; Tayca Co. Ltd., Japan), and alkylsilane surface-modified particles with a primary particle size of 15 nm (NKT90, anatase phase; Japan Aerosil Co. Ltd.) were used in experiments. The primary particle size of the surface-modified particles was determined by transmission electron microscopy (TEM, Japan Electron Optics Laboratory JEM-3000F, source type JEM-2010, 200 kV). The X-ray diffraction (XRD, Rigaku, RINT2550, VHF) patterns of both samples showed that they were similar phase to the manufacturer’s measurements. The coupling agent (3-acryloxypropyl) trimethoxysilane (APTMOS; KBM5103, Shinetsu Co. Ltd., Japan) was also used in nanoparticle suspensions. The beads mill contained 15 ím ZrO2 (zirconia) beads (Neturen Co., Ld. Tokyo, Japan). Prior to the preparation of nanoparticle suspensions, the MMA monomer solvent (Mitsubishi Gas Chemical, 99.8% purity, 0.569 cp at 25 °C) was purified by distillation. Azobisisobutyronitrile (AIBN, Otsuka Chemical Co., Ltd. purity: >99%) was used as a polymerization initiator.
Milling Process. A schematic of the beads mill is shown in part b of Figure 1 and a detailed description of the beads mill is found elsewhere.28,29 The beads mill is composed of an 80 mL vessel, a pump, and a mixing tank. Nanoparticle suspensions are pumped into the vessel, which contains the zirconia beads and a centrifugation rotor. Beads are agitated in the lower portion of the vessel (the dispersing section), which drives the breakup of agglomerated particles. The suspension is pumped from the dispersing section to the upper region (the centrifugation section) where centrifugal force is used to separate the zirconia beads from the nanoparticle suspension. The centrifugal force can also remove large nanoparticle aggregates until they are broken into primary particles. The nanoparticle suspension is then recycled back to the dispersing section. To prevent temperature increases in the system, the vessel is housed in a cooling water jacket and is completely sealed from the outside environment.
For the break-up of titania agglomerates suspended in MMA, titania-MMA suspensions with mass fractions of titania ranging from 0.01 to 0.1 were pumped through the beads mill with a recirculating mass flowrate of 10 kg/h (29 s residence time in the milling region, 25 cycles per hour, 144 s total recirculation time). Nanoparticle suspensions were prepared with and without the addition of a coupling agent. Centrifugal forces for bead separation in the upper part of the vessel were generated by rotating the outer cylindrical wall at a speed of 10 m/s. The zirconia beads occupied 65% of the vessel volume.
Polymerization. After milling, the titania-MMA suspension was transferred to a reaction flask, to which the polymerization initiator AIBN was added such that there was an AIBN to MMA mass ratio of 0.001. Polymerization was carried out at 60 °C in an N2 atmosphere for 6 h.
Film Preparation. Titania-PMMA nanocomposite (1 g) was dissolved in 20 mL of tetrahydrofuran in a glass flask (50 mL) and spin-coated using a spin coater (1H-D7, Mikasa) onto sapphire substrates (Kyocera Co., Ltd). Spin coating was performed with a dropping volume of 1 mL at 2000 rpm.
Material Characterization. Particle-size distributions after selected milling times were measured using dynamic light scattering (DLS) with an FPAR-1000 (Otsuka Denshi. Co., plastic cuvettes, 1 mL volume). Size-distribution measurements were made without dilution in duplicate to ensure reproducibility. The refractive index and viscosity of MMA were used as input parameters for an instrument built-in software package for size-distribution deconvolution. The samples were dried and mixed with KBr powder for FTIR measurement (PerkinElmer, Spectrum One System A, range: 7800-350 cm-1, resolution: 0.5-64 cm-1, transmission mode). The samples were poured in a quartz cell of 1 cm optical depth and measured by UV-vis spectroscopy (U-2810, Hitachi, 190-1100 nm). TiO2 nanoparticles after MMA polymerization were observed using transmission electron microscopy. To obtain TEM images (JEOL-JEM-2010, 200kV), the TiO2-PMMA composite was cut into thin layers using a microtome, and a single, thin layer was placed on a TEM grid. The thermal properties of TiO2-PMMA nanocomposites were measured with a thermogravimetric analyzer (Shimadzu Thermo Plus TG8120; maximum temperature, 800 °C; temperature ramp rate, 5 °C/min in N2). A prism coupler (Model 2010, Metricon Corp.) was used to measure the refractive index of spin-coated composite films at a wavelength of 633 nm.

where n, na, and nb are the refractive indexes of composite polymer, PMMA, and TiO2 (nb ) 2.76), respectively, and Va and Vb are the volume fractions of PMMA and TiO2, respectively. Measured refractive indices were slightly lower than was predicted by the model, which may be due to the presence of impurities in the titania particles or the addition of coupling agents during beads milling.

Figure.2 (a) FTIR spectra of titania particles and titania-MMA suspensions with APTMOS after selected milling times (A, C-H stretching in methoxy functional groups; B, CdC in APTMOS; C, Si-O stretching in Si-O-R groups). (b) Particle-size distributions of unmodified and (c) surface-modified TiO2 particles in MMA after selected milling times with the addition of a coupling agent. The titania mass fraction in the suspensions was 0.01 in both (b) and (c). 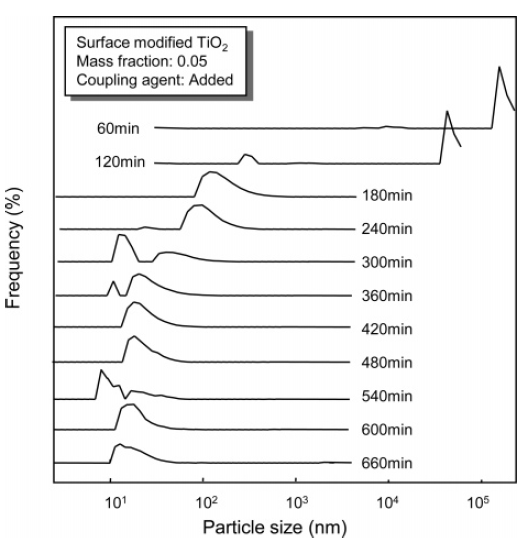 Figure.3 Particle-size distributions of the surface-modified TiO2 particles in MMA after selected milling times with the addition of a coupling agent. The titania mass fraction in the suspensions was 0.05. 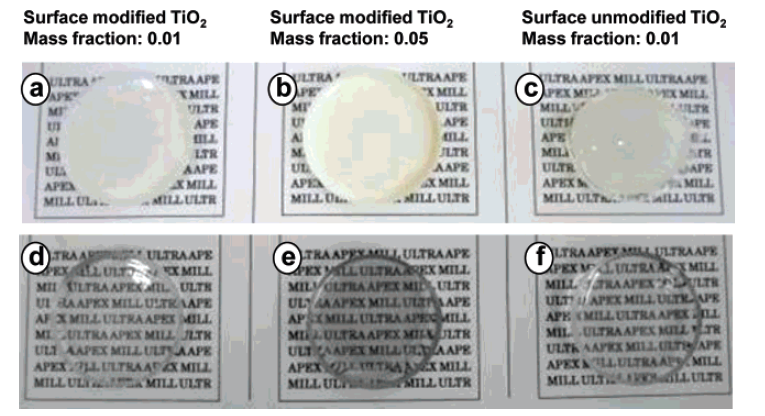 Figure.5 Images of titania-PMMA composites made from the polymerization of (a-c) unmilled and (d-f) milled titania-MMA suspensions. 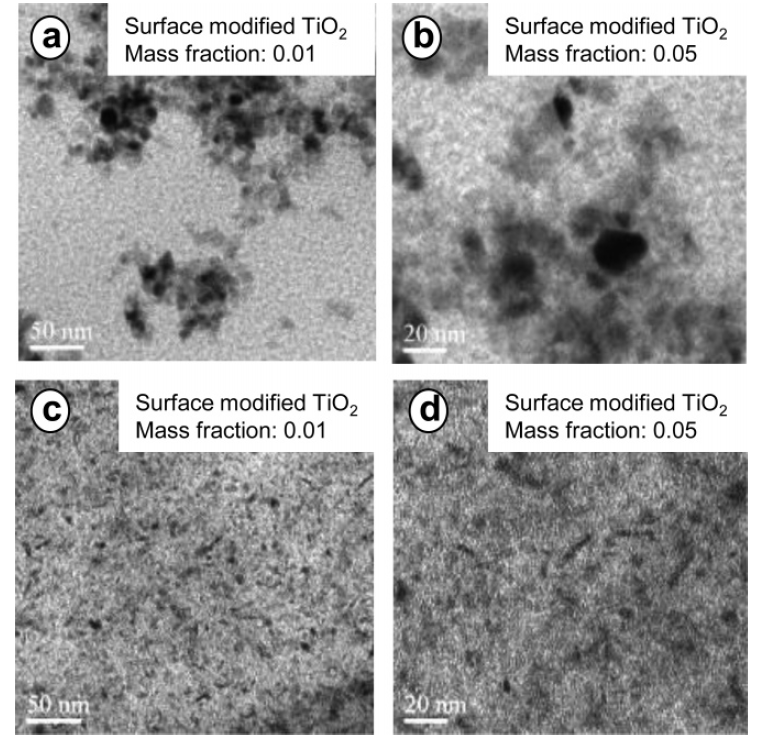 Figure.6 TEM images of titania particles in titania-PMMA composites made from the polymerization of (a-b) unmilled and (c-d) milled titania-MMA suspensions. 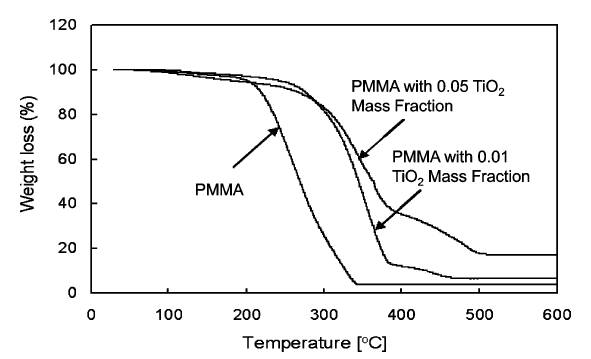 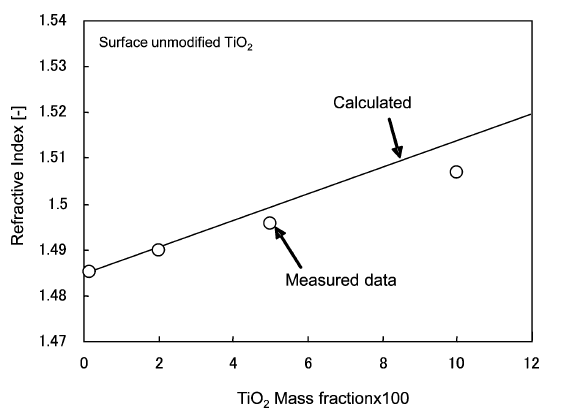 A new type of beads mill was used to process suspensions of titania and MMA to break up titania nanoparticle agglomerates. Without the addition of a silane coupling agent, particle reagglomeration was rapid enough such that any agglomerates broken up by beads milling reagglomerated as the particles recirculated though the beds mill. With the addition of a silane coupling agent, the beads mill was capable of breaking up nanoparticle agglomerates in suspensions where the nanoparticle mass fraction was as high as 0.05. Well-dispersed titania nanoparticles have little effect on the transmittance of visible light through MMA but enhance the UV absorbing properties of MMA. By polymerizing MMA in titania-MMA suspensions, titania-PMMA nanocomposites were formed. PMMA in PMMA-titania nanocomposites was more thermally stable than PMMA alone. The results of these experiments show that beads milling with a newly developed beads mill is a robust and simple technique for dispersing nanoparticles into organic solvents, which is one of the major obstacles to overcome in polymernanoparticle composite synthesis.